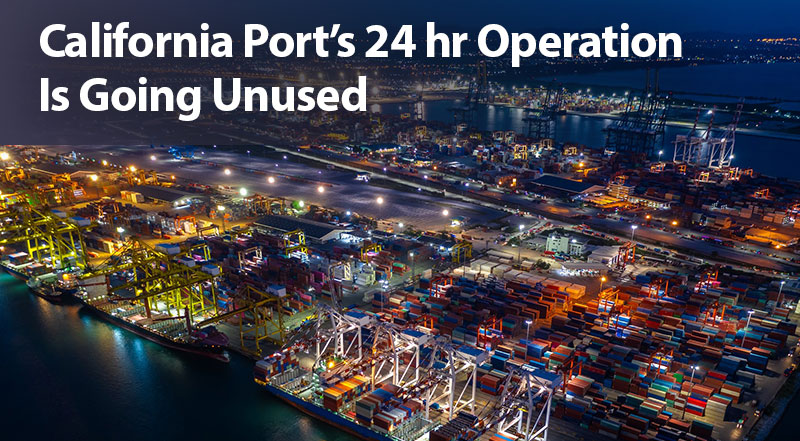 A pilot program offering 24-hour container operations at the Port of Long Beach hasn’t enticed any truckers for more than two weeks. Thus, highlighting challenges facing Southern California seaport as dozens of ships back up off the coast.

Total Terminals International LLC, among the largest terminals at Long Beach, began Sept. 13 to allow truckers to pick up containers between 3 and 7 a.m. Monday to Thursday. However, according to the TTI Chief Executive, Bill Peratt, “port has had zero deliveries.” Mr. Peratt said TTI is talking to local trucking companies to see if the terminal can attract drivers to pick and drop off containers, and they would attempt to have some adjustments to modify.
Thus, the extended hours among efforts at the neighboring Los Angeles and Long Beach ports to cope with a flood of imports this year has swamped the essential U.S. trade gateway and disturbed inland supply chains. The backups have increased the number of container ships idling offshore for up to three weeks in record numbers, according to the Southern California Maritime Exchange. Therefore, the congestion at the California port, which handles more than a third of the U.S. seaborne imports, is exacerbating soaring costs and shipping delays for U.S. manufacturers and retailers. Containers at the ports waited, on average, 5.4 days to be picked up from the docks by the truck, according to the Pacific Merchant Shipping Association, the picking date has increased up to 2.5 days before the pandemic.

Most terminals are closed at least several hours a day during the week, with more limited operations on Saturdays and Sundays. The shift to 24-hour operations at one of the Long Beach port’s six terminals was encouraged by the Biden administration as part of its goal of reducing Congestions across the supply chain, including inland railroad terminals and warehouses. However, according to Mario Cordero, the executive director of the Port of Long Beach, as he has asked the major retailers to direct truckers, the 24-hour operations must take time to set up new work patterns.

Furthermore, drayage companies, which specialize in hauling cargo by truck from ports to local yards and distribution facilities, say the overnight system is burdensome. Truckers can only make an appointment to pick up a container if they can drop off a specific type of container and chassis during the same run. Getting everything to match up can be difficult, said Matt Schrap, chief executive of the Harbor Trucking Association.

As the terminal is exploring ways to make the program more productive because being able to move more containers off the docks allows the terminal to unload ships more quickly; however, the limited number of truck drivers and types of chassis, it is not only hard to push cargo out the gate, but also to pull containers out off the vessels.