Logistic chaos in the United States 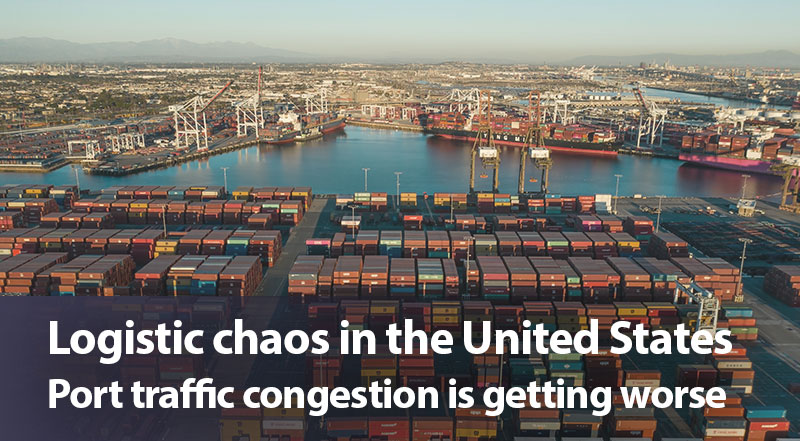 Port traffic congestion is getting worse. The shortage of the supply chain is the main problem.

The U.S. supply chain is struggling to adapt to a crush of imports flooding through major ports. Containers are continuing to stack up at the port of Los Angeles and Long Beach and delays at the busiest U.S. port complex are growing. Supply-chain participants including shipping lines, port workers, truckers, warehouse operators, railways, and retailers criticize others of the imbalances and disagree on whether 24/7 operations will solve the traffic congestions. German container line Hapag-Lloyd says the port is operating at 60-70% of its capacity, causing a “huge operational disadvantage.” Tom Boyle, CEO of Quik Pick Express, a regional trucking and warehouse provider, says the biggest problem at all workplaces’ lies in the availability of workers.

Los Angeles and Long Beach ports are taking very different paths to solve the congestion problems. Long Beach officials are launching a 24-hour pilot program, a plan encouraged by the Biden administration. At Los Angeles, Director Jin Seroka tells Paul Berger of the WSJ Logistics Report that the gateway will benefit from its operations, which he says is not operating at its highest efficiency. Mr. Seroka pointed out that 30% of the freight transportation reservation time is not used on average per day, and freight carriers and nearby warehouses generally do not work overnight to meet the 24-hour gate operation. Steve Hennessy of the Pacific Ocean Association, which represents terminal operators, said extending gate time in this situation would only shift bottlenecks from one part of the distribution chain to another that is already struggling to catch up.

Therefore, warehouse operators are pulling out all stops in an increasingly urgent effort to hire seasonal workers. Jennifer Smith of the WSJ Logistics Report writes, as logistics companies are raising wages, adding flexible shifts, and covering social media as operators to compete for labor with financially challenged competitors in preparation for the expected flooding of vacation supplies. Some companies are even shipping robots to fill an operating gap that could slow deliveries during a crucial fourth quarter for retailers and logistics providers. In some markets, wages for e-commerce workers jumped to $19 an hour, while Amazon raised hourly wages to $22 in some areas. Amazon, United Delivery Service, and Walmart have already announced plans to hire tens of thousands of employees during the peak season.

As supply chains in the U.S. Farm Belt are starting to grow rapidly, the months-long rise in prices of major agricultural products has increased farmers’ income and increased spending on land and equipment. WSJ’s Jesse Newman and Bob Tita reported that prices of new and used agricultural equipment soared, as rising sales and disruptions in key components cause shortages and delivery delays for new machinery. The latest machinery market is driving a windfall for manufacturers such as Dear & Co., whose; profits from large agricultural equipment surged 50% in the company’s latest quarter. The sales are growing, and forecasters suggest U.S. agricultural exports will reach record highs in the 2021 and 2022 fiscal years. However, large-scale investments involve risks, and the cargo trainload of major supplies is signaling a warning. Grain carloads load measured by the American Railroad Association fell 17.6% in August from a year ago.