Our economy relies on shipping containers 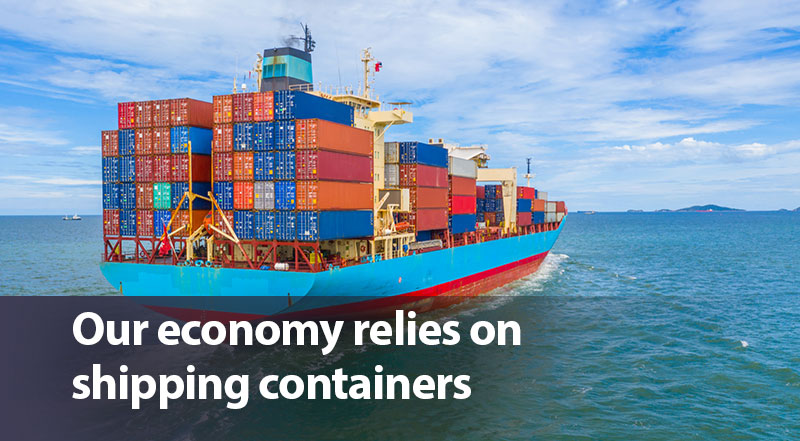 Having the active spread of commerce, people have been using boxes, sacks, barrels, and containers of varying sizes to transport goods over long distances. Therefore, an estimated 90% of the world’s products are now transported by sea. Specifically, the average size of a container ship has doubled in the past 20 years, which can haul 24,000 containers.

Thus, an estimated 90% of the world’s goods are transported by sea, with 60% of that including virtually all your imported fruits, gadgets, and appliances packed in large steel containers. The rest is mainly commodities including oil or grains that are gushed directly into the hull. In total, about 14 trillion USD of the world’s goods spend some time inside a big metal box, which we call a “container.” However, in short term without the standardized container, the global supply chain will be face shortages. A recent shortage of these containers is raising costs and growling the supply chains of thousands of products across the world. The situation highlights the importance of the simple, yet essential cargo containers that are still floating on the sea.

Trade before the container
As trade grew more in advance, the process of loading and unloading as goods were transferred from one method of transportation to another remained very labor-intensive, time-consuming, and costly. All different sized packages in the container also meant space on a ship could not be efficiently applied and created weight and balance challenges for a vessel. Since goods were likely to experience damage from handling and be exposed to destruction.

The growing size of ships has a cost, and as maritime shipping has grown increasingly important to global supply chains and trade, yet it was rather invisible until the logjam and blockage of the Suez Canal. About 12% of the world’s global shipping traffic passes through this canal and at one point during the blockage, at least 369 ships were stuck waiting to pass through the anal from either side, costing an estimated $9.6 billion a day. That translates to $400 million an hour, or $6.7 million a minute. Ship-building companies continue to work on building ever-larger container vessels, and there’s little indication this trend will stop anytime soon. Some experts forecast that ships capable of carrying loads 50% increment by 2030. In other words, the shipping container will remain more popular in demand than ever.