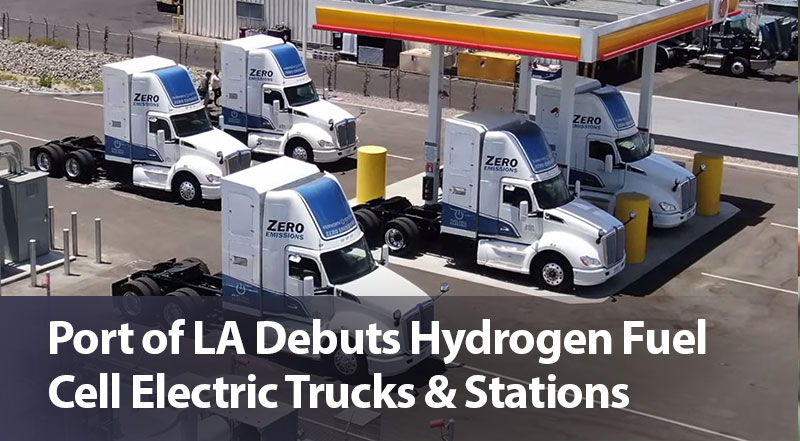 In the first quarter of 2019, there was a question as to which zero-emissions technology will win trucking and there were many voices addressing truck emissions with a different agenda. There is no magic bullet in the push for zero emission and fleets will just have to choose the right one for their particular operation.

California and other regions with ozone issues are concerned about NOx as an air quality and health problem. Diesel powered trucks involved in deliveries and drayage produce a large amount of NOx especially when they operate under low-load and low-speed conditions.

The Port of Los Angeles and its partners, Toyota, Kenworth Truck Co., and Shell are launching a new era of pollution free goods movement with the debut of five new hydrogen powered fuel call electric vehicles and the grand opening of two hydrogen fueling stations in Wilmington and Ontario. The 82.5 million Shore-to-Shore project has private sectors teaming up for a 12-month demonstration of the zero emissions Class 8 trucks. The demonstration is to advance the Port’s Clean Air Action Plan goals and help California achieve statewide climate change, air quality improvement and sustainability targets reducing greenhouse gasses and toxic air emissions. Gene Seroka, Director of the Port of Los Angeles stated the project being a model for developing and commercializing the next generation of clean trucks and cargo-handling equipment for the region and beyond. Shell is working with truck manufacturers, fleets, governments and others to coordinate hydrogen infrastructure investments in high-traffic freight areas like the Port of Los Angeles, Port of Long Beach, the Los Angeles Basin and the Inland Empire.

The California Air Resources Board (CARB) is supporting the project with a matching grant of 41.4 million to help fund, support and promote comprehensive efforts like Port of LA’s Shore-to-Shore project that will run cleaner and quieter trucks that will reduce greenhouse gas emissions substantially and lower smog-forming emissions as well.

Zero emission trucks will alchemize how freight is moved in the most congested regions in the USA.