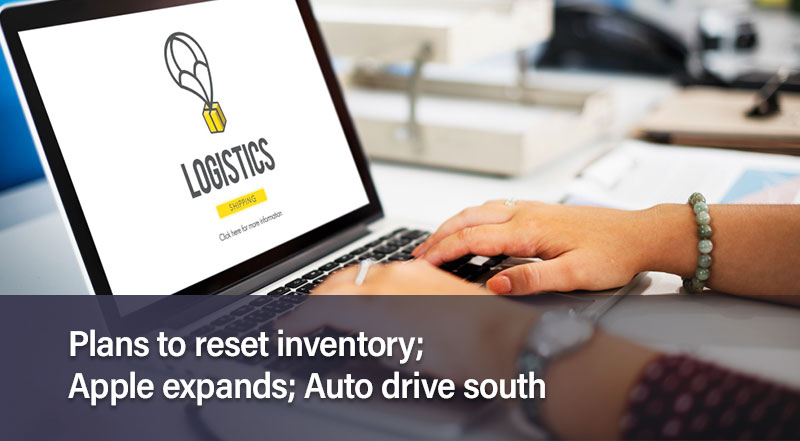 Supply-chain challenges are causing companies to reconsider managing inventory to meet customer demand while preserving their balance sheets. Businesses including film and photographic supplies manufacturer Eastman Kodak and beauty-products maker Olaplex are among those that are holding more inventory as a strategy to guard against potential shortfalls from ongoing delays in shipments. The research group says the share of shipments arriving on time in North America from Asia ticked up from 9% in April to 11% this month; however, that remains far below the 59% on-time arrival rate of May 2020. Furthermore, chemical company Chemours has cut down on the number of orders it takes, and sports apparel merchant Under Armour has even canceled customer orders because of supply chain issues.

Moreover, the world’s most influential electronic devices company, Apple, wants to shift one of its crucial electronics supply chains away from its tight focus on China. The company has told some of its contract manufacturers that it intends to boost production outside the country since the concerns of Beijing’s strict anti-Covid policy place too much risk on Apple’s distribution of its high-value parts and finished goods. Thus, India and Vietnam, already sites for a small portion of Apple’s global production, are among the countries getting a closer look as alternatives. Any move by Apple to emphasize production outside China could influence the thinking of other Western companies considering how to reduce dependence on China for manufacturing or critical materials.

On another issue, the move by automotive manufacturers to the U.S. South is picking up speed. South Korea’s Hyundai Motor Group plans to build a $5.5 billion manufacturing complex in Georgia dedicated to making electric vehicles. It adds to the drive-by car makers recasting U.S. automotive supply chains. Like other car companies, Hyundai is moving to expand its electric-vehicle offerings, suggesting that the technology is triggering a new look at the extensive supply chains built around the sector over decades. Hyundai’s plant will open in the first half of 2025 near Georgia’s Port of Savannah, and the production needs and supplier deliveries should add to the burgeoning business across the Southeast. Savannah’s container imports are 40% ahead of pre-pandemic levels and box volumes at the Port of Mobile, Ala., were up by nearly 40% over April 2020.