Importers are subject to penalties for lingering containers 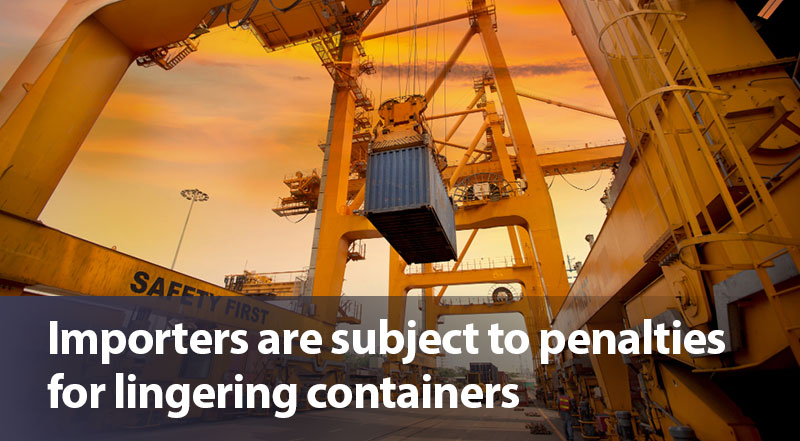 Logistic industry officials have reported that retailers and other cargo owners will ultimately bear the cost of drastic new fees on Monday by the ports of Los Angeles and Long Beach in response to escalating congestions, which disrupts the entire U.S. economy.

The fee ostensibly penalizes ocean carriers for not quickly clearing out imported carriers piling up in their terminals, but the lack of specifics in the press release left freight industry stakeholders puzzled about how the rules will be applied. Thus, beginning on Monday, November 1st, the two Southern California ports said they will begin charging ocean carriers $100/container, compounding in $100 increments each day. Also, containers moving by rail and shipping lines will be charged if the container has stayed for six days or more. For example, if a box sits longer than the allotted time would cost a carrier $100 on the first day after storage time for truck moves expires, and the penalty will increase by $100 per day for each day.

Therefore, within the minutes of the announcement by the twin ports, container lines began sending letters to importers altering them to be prepared for the new charges, Matt Schrap, CEO of the Harbor Trucking Association. He has emphasized, “So clearly, they are not just absorbing these costs as a part of doing business to get this cargo out. They are passing these costs on the beneficial cargo owner, which as we all know goes right into the American consumer’s bottom line.”

On Tuesday there were 77 container ships waiting offshore for a parking spot in the port complex, according to the Maritime Exchange of Southern California. Ocean carriers said they are still trying to get more information and better understand the new rules of fees, which the port authorities have determined with the White House and the Department of Transportation.

However, several freight experts expressed skepticism about whom the fees will impact, why carriers are being singled out, and whether the ports have the legal authority to impose late fees. The daily fees for containers that remain at terminals appear designed to pressure shippers to pick up containers faster. The port authorities had to direct the surcharges against carriers with a terminal lease because they don’t have jurisdiction over importers, though officials realize the customer is likely to ultimately pay.

Carriers already charge demurrage to importers if exceed allotted free time for retrieving containers. Preventing those charges is a priority for merchants since they typically try to pick up cargo within one to three days on the expectation that containers will be available at terminals when scheduled. Thus, having the additional penalty or charge would not motivate merchants to do anything faster to pick up the containers since the demurrage and detention charge has increased by 42% from 2020 to 2021 at the San Pedro Bay ports, according to the July report.

Meanwhile, the state of California is expanding its own effort to find short and long-term solutions to inefficiencies gripping the port sector amid record demand for goods this year after the COVID pandemic set off the shipping chaos. The moves build on earlier efforts this year to work with industry stakeholders and the Biden administration to increase the velocity of container distribution from California ports.