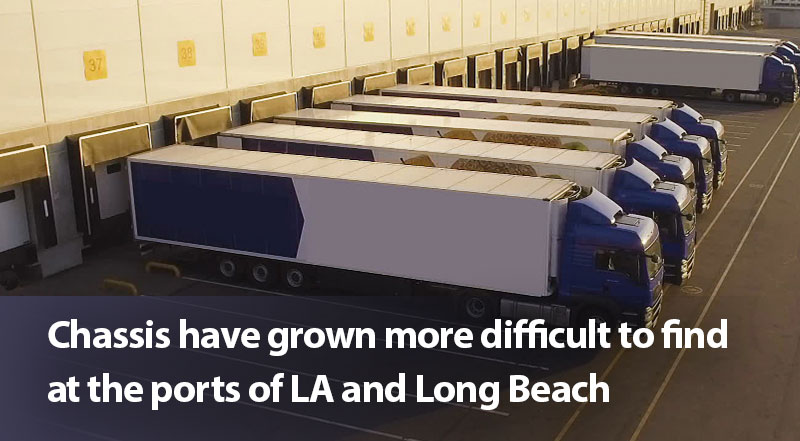 Transportation administrators are struggling with the supply-chain congestion that is frustrating U.S. importer’s ability to clear the bottlenecks rests largely on a simple piece of steel and wheels that has long been an afterthought in global shipping.

The trucking trailers, known as chassis and used to ferry containers from dockside terminals, have grown more difficult to find at the ports of Los Angeles and Long Beach, California. Officials have emphasized that the sudden flood of imports has swamped the facilities and tied up the equipment needed to keep goods moving. The main cause of this problem is that truckers in Southern California are struggling to move containers from port terminals and rail yards since there is a shortage of chassis to carry the boxes.

Executives, who stay close to the operations around the ports have underlined unraveling the gridlock at the coast, including the backup of more than 70 container ships anchored offshore and waiting for berth space, which won’t be possible without solving equipment problems, such as the chassis shortage, that have restricted operations. “The chassis is the biggest issue” in problems that stretch from the docks at the neighboring Los Angeles and Long Beach ports to warehouses deeper into California and intermodal rail yards in the Midwest, said Matt Scharp, chief executive of the Harbor Trucking Association, which represents port truckers in Southern California.

The reason container ships are backed up outside the country’s biggest containers seaport complex is because the dockworkers cannot upload ships quickly enough. Since not only terminals are full of boxes, but also the shortages of chassis. Normally, there are enough trailers to handle thousands of containers moving through the ports. However, the heavy flow after the pandemic starting from 2020, many warehouses are overwhelmed nowadays resulting in delays in unloading the container, the trucker often leaves the box atop the chassis for a day longer than usual at a receiving facility.
As a result, an unexpected decline in the supply of new frames exacerbates the shortage, according to trucking and chassis executives. The U.S. International Trade Commission imposed countervailing and anti-dumping duties totaling more than 200% on Chinese chassis producers that supplied most frames to the U.S.

“If you came to lease a chassis today, my response to you would be, ‘Here’s a piece of paper, sign it and I can get you a chassis in the third quarter of next year,’” the Chief executive vice president of Milestone Chassis Co., has confirmed his statement.